How To Tie Dye Your LEGS

I am about to show you how to tie dye your legs... or leggs really. 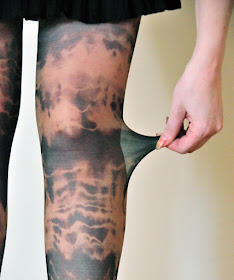 Yeah, they're just stockings, but the result is still the same. I now have 3 different crazy pairs of tights that each were made from old clothes and food coloring. 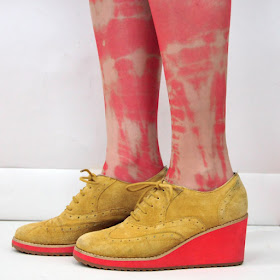 I do know that this red color looks like I got a sunburn or was in a bad fire, so you can stop saying so. This was an experiment, and so the black color that I wanted turned out red. I've fixed it, look: 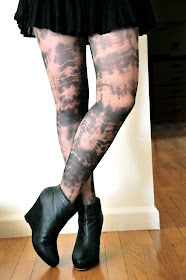 I first thought of tie dying tights when I learned that nylon could take acid dyes, the same type used to color wool. That means you can make these with Kool Aid or any food dye with a bit of vinegar.

1+ pack of Kool Aid in any color, mixing is fun. I recommend starting of with a variety pack like this.
1 pair of inexpensive stockings. They need to be nylon, not a fancy blend.
Some string.
A pot.
A source of heat
Water 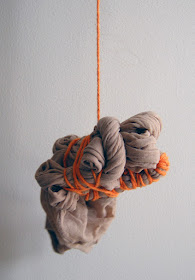 I tied up my nylons randomly into a big blob. You might want to look to the food colored green stockings for a more uniform tying technique. 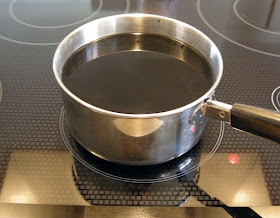 Add your Kool Aid to a pot of water. Heat it on the stove until it is simmering.

I prepared a dye bath of water and Black Cherry Kool Aid. I found that the nylon picks up red dye before other colors and will kind of ignore the blue color as long as there is red to soak up. Keep this in mind  because your color may come out different than what you expected. 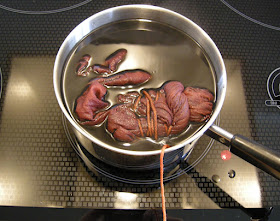 Add your tights to the dye, you can take them out when they have soaked up all the dye or when you are satisfied with the intensity of the color. 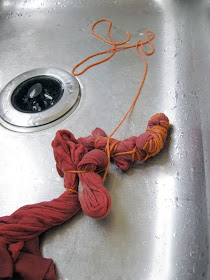 Let them cool, and take off the string. 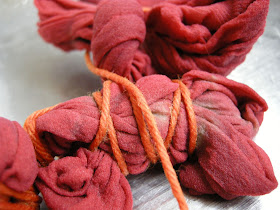 You should see spots of undyed fabric under the string. Rinse the stockings under cold water after they are unwrapped. make sure to rinse them until they no longer bleed dye. 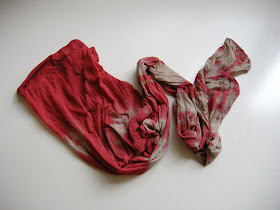 You'll have something like this. Now Try it on!

Red dye only kind of looks like a terrible skin disease. After seeing these, I wanted to try a cool color, but I've never found the blue Kool Aid around here. Directions for using food coloring are as follows:

Food coloring
1/4 cup of vinegar, the kind for cleaning that comes in the plastic jug, not the salad kind, though it may work
1 pair of inexpensive stockings. They need to be nylon, not a fancy blend.
Some string.
A pot.
A source of heat
Water 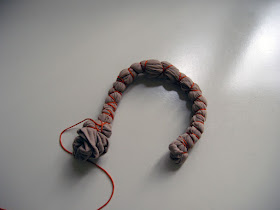 This time, I folded the stockings in half lengthwise, then in half again. I wrapped the string around the snake of stockings uniformly, then wrapped back to where I started. I tied the two ends. This method made much better tie dye marbling.

I added the vinegar and a squirt of forrest green dye to a pot of water and heated it to a simmer on the stove. I added the stockings. At first, they seemed to take the green color well, but after a minute, the small amount of red and yellow color in the dye started to break. Breaking is when the colors in the dye split, you can see all of the colors in the dye separately. It is hard to explain, but you can see it in the photo. I removed the tights from the dye when red brown color started to emerge and rinsed them in cool water. 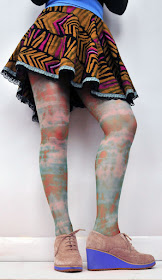 This is the green and brown combo that resulted. it is forest/jungle-y so I have no idea what I'd wear them with. I think that they do look OK on. You can definitely try this with a different color and get some interesting results. I wanted to try more colors, but I ran out of nylons. There were a few pairs of old ballet tights in my drawer, so I decided to try those.

The tag said "supplex." There was no info on the internet about whether acid dye would work on that fiber. I decided to try it anyway. The tights are opaque, nearly white, pink. 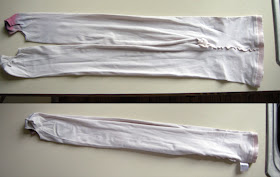 I flattened the tights so that they were pretty smooth, then folded them in half. Starting at the toe, I rolled them into a little bundle. 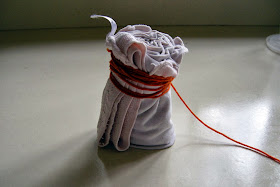 This is the bundle. It was soaked in water in preparation for dyeing. 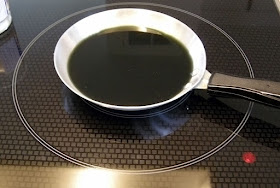 There was still color left in the black cherry bath, so I poured some into a little tiny shallow pan and heated it to a simmer. 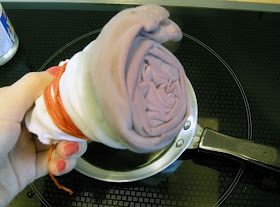 The little bundle was set standing in the dye until some color started to soak in. it was then untied and rinsed in cold water.

The color was still a bit pale, so I overdyed in the leftover green color. 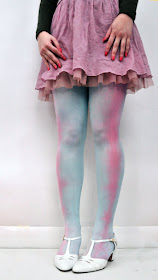 This is how they turned out. If unicorns wore tights...

The rolling method made a stripe up the sides of each leg. It looks kind of interesting and definitely merits more experimentation. 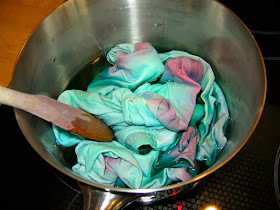 So this is the end of this very, very long  cataloging of my day dyeing stockings. I spent no money to do this because all of the supplies were in the house. If they weren't in the house, the cheap stockings are 99¢ and the pack of Kool Aid is 25¢. Some of the more expensive food coloring, like the kind in the second experiment, is still only $2 and you use a tiny bit of it. Look out for after easter clearance of egg dyes, they'll work too. Basically, you can do this for very little money. 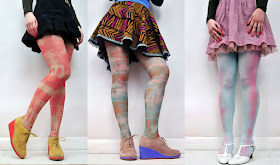 Maybe I'll never wear really busy stockings like these, but they would be awesome for kids. They could definitely get involved in the creation of their own colorful tights.

And yes, I do have two pairs of the same colorblocked wingtip brogue wedges in different colors. They're the best.